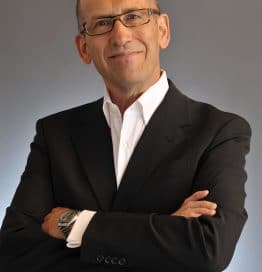 Jim started his retail career in 1964 in a men’s wear store in Chicago. He was appointed Store Manager in 1969. From 1972 to 1974 he was night Manager of the Sheraton Hotel in downtown Chicago.

From 1975 to 1980 he was employed by Sears Canada where he started in Retail Management in Richmond Hill, Ontario and moved to the Toronto Catalogue Center in an operating position. He was promoted to Buyer, Jeanswear and was responsible for buying and marketing for 68 retail and 958 catalogue stores.

In 1980 he left Sears to become National Sales Training Manager for Levi Strauss. During his time with Levi Strauss he developed one of the most advanced Sales Training Programs in the industry, in addition to introducing a Just-in-Time inventory system to Levi Strauss factories. From 1985 to 1988 he was Executive Vice President of Gilmore’s Department Stores in Kalamazoo, Michigan where he repositioned a 106- year-old chain in a highly competitive retail environment.

Jim has taught at Laurier University and Ryerson University and the International Academy of Fashion Merchandising and Design in Chicago. Jim is a regular speaker for the National Retail Federation (NRF) on Retail Trends, Technology, Inventory Control, Best Practices in Sustainable Retail and Store Management. He has authored the definitive retail selling manual titled “Retail Selling Ain’t Brain Surgery, It’s Twice As Hard.” In addition, he has co-authored “Start and Run a Retail Business” for Self-Council Press and is the author of “The Complete Idiot’s Guide to Starting and Running a Retail Store”. (All books are available at local book stores or on Amazon.com.)

Jim consults with retailers large and small in the U.S. and in over 15 countries. He is a recognized expert in the North American PC market, a Microsoft Developer, and has experience with major retail system installs and numerous POS installs. Jim also studies and evaluates new retail POS, EDI, merchandising systems and CRM software. He was a judge for the Microsoft© Retail Developer Awards as well as a Judge for CIO Magazine Top 100. As well, Jim lectures and writes for numerous trade and national magazines on retail trends, technology issues and on the Internet and its use and misuse by retailers and manufacturers. He is a faculty member in the MBA program of Harley-Davidson University in Milwaukee. He has appeared on NBC, CNN Turkey, First Business and Fox News.

He graduated from Chicago State University (Illinois) BS and MS in Psychology in 1970 and 1971 and attended Illinois Institute of Technology Ph.D. (abd) in Industrial Psychology and Marketing in 1976.

Solving The Pace Of Innovation, One Innovation At A Time

10:15 am - 10:45 am Booth 2241
Discussion Hub Retailer Networking Events More
We use cookies on our website to give you the most relevant experience by remembering your preferences and repeat visits. By clicking “Accept”, you consent to the use of ALL the cookies.
Do not sell my personal information.
SettingsAccept
Privacy & Cookies Policy

This website uses cookies to improve your experience while you navigate through the website. Out of these cookies, the cookies that are categorized as necessary are stored on your browser as they are essential for the working of basic functionalities of the website. We also use third-party cookies that help us analyze and understand how you use this website. These cookies will be stored in your browser only with your consent. You also have the option to opt-out of these cookies. But opting out of some of these cookies may have an effect on your browsing experience.
Necessary Always Enabled
Necessary cookies are absolutely essential for the website to function properly. This category only includes cookies that ensures basic functionalities and security features of the website. These cookies do not store any personal information.
Non-necessary
Any cookies that may not be particularly necessary for the website to function and is used specifically to collect user personal data via analytics, ads, other embedded contents are termed as non-necessary cookies. It is mandatory to procure user consent prior to running these cookies on your website.
SAVE & ACCEPT